You are here: Home / Health / Healthy Eyes / Panda Eyes: 15 Causes and How To Get Rid Of It 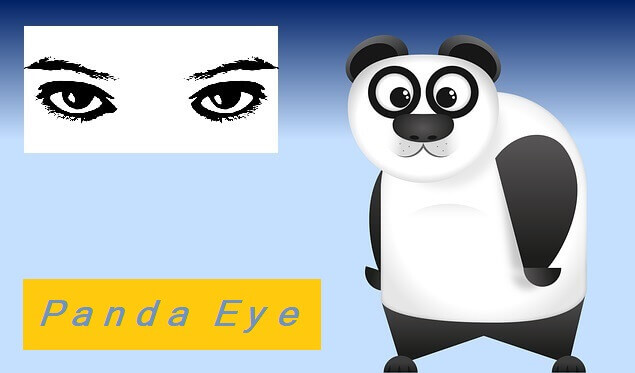 The panda eyes are black circles or dark colors that form under the eyes.

Panda eyes are generally not a serious health problem.

In some cases, the panda eyes indicate the need for dietary improvement and sleep habits.

Causes of panda eyes can vary, including:

Lack of sleep causes the emergence of dark circles on the eyes that are often referred to as panda eyes. This condition can cause a person to appear older and become less confident.

However, sometimes your panda eyes still appear even though it has slept with enough duration. In addition to lack of sleep, there are many things that cause panda eyes. Some of the causes of panda eyes can be fixed, but others will survive.

The emergence of dark circles on eyes since childhood is often caused by hereditary factors. A person with a panda eye generally has a family member who also has the same condition.

The panda eye conditions influenced by offspring will become increasingly visible as you age.

Have you ever noticed that the dark circles on the eyes is more often found in the elderly? Age causes a person more susceptible to the panda eyes.

This is because the skin will experience depletion as people age. In addition, decreased production of fats and collagen in the area around the eye can also occur.

This will certainly worsen the condition of the black circles on the eyes.

The habit of staring at screens

Staring at a television screen, computer, or mobile phone for a long time can cause strain to the eye. This tension makes the blood vessels around the eyes grow. As a result, the skin around the eyes becomes dark.

Dehydration can also be a cause of panda eyes. When the body is deficient in water, the skin under the eyes will look concave and glazed.

Although not a health disorder that needs to be feared, this problem is quite disturbing the appearance.

How to get rid of Panda eyes

No need to confuse when Panda eyes start appearing. Here’s how to remove the panda eye that you can try.

Sleeping with enough is the easiest and simplest way to cope with the panda eyes. Not only does it make the eyes bright, while sleeping, the body will also repair damage to the cells that occur in the skin.

Sleeping with a high pillow

The way you sleep can also affect the panda eyes. Sleeping with pillow arranged upwards can prevent liquids from gathering under the eyes, which can cause the face to look swollen.

This one way How to remove panda eyes is simple. Simply dip the towel into the ice water, then place it under the eyes for 20 minutes.

The cold temperatures received by the skin can help reduce swelling, and will help shrink the blood vessels, so that blood circulation can run better.

Take time to remove your makeup before bedtime. Letting an overnight makeup can cause watery eyes and create a pouch on the next day.

Dehydration is one of the triggers of eye bags. Improving daily fluid intake can be one way to cope with the Panda eyes.

As we age, the muscles and tissues of the eyelids begin to weaken. This means the eyes start to sag and cause pouches around it.

Increase the intake of foods rich in vitamin C and amino acids that can help collagen production for healthier skin.

Read also:
How to get rid of panda eyes naturally

*
We use cookies to ensure that we give you the best experience on our website. If you continue to use this site we will assume that you are happy with it.OkPrivacy policy